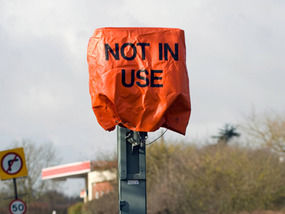 Once upon a time, long long ago, I was tangentially involved, mainly as a researcher of sorts, with something grandly called the Oxford Motor Industry Research Group, which was actually a group of academics with links with shop stewards galvanised in the summer of 1989 by plans to close the car works in Cowley. The group was led by the activist-scholar Teresa Hayter (author of, amongst other things, Hayter of the Bourgeoisie). I seem to remember that part of the politicking around the future of Cowley, which dragged on well into the 1990s, involved plans to transfer all car production to Swindon. The Oxford plant wasn’t closed completely in the end. I, on the other hand, have indeed ended up in Swindon.

Twenty years on, there is a big mini hanging on a wall outside the BMW plant, locally referred to as Pressed Steel (good name for a band). Swindon used to build trains, now it builds cars. Even the major architectural landmarks in the town are car-related: the Magic Roundabout; Norman Foster’s Renault Building (now home to a fantastic soft-play centre for kids); the defunct speed cameras; the switched-off street lights.

What with the speed cameras covered, and the street lights turned off, it’s boy-racer heaven here. Turning things off and failing to gets things to work has become a bit of a signature of recent local council initiatives. In November 2009, shortly after we moved here, it was announced with great fanfare (locally, that is, though it made national news too) that Swindon was to become the first place in the UK to offer free wireless internet to all households. A scheme funded largely by the borough council was to be rolled out across the whole town, apparently, by April 2010. This was hailed by the controlling Tory group on the Council as an innovative public-private commercial venture. “Trailblazing Swindon Council is working with the private sector to make Swindon the first town in the UK to provide free internet access for all its residents”, they said.

Needless to say, things haven’t turned out quite as planned. The deal struck between the Council and Digital City Ltd, the company set-up to develop the free wi-fi scheme, has been mired in controversy from the start. The £1.5million project was leveraged by a loan from the Council to the tune of £450,000, but the loan deal was characterised by a lack of transparency and accountability, related to the specific type of cabinet system adopted in Swindon, which meant the deal was basically signed-off by a couple of senior Tory council leaders.

After countless delays, earlier this year Digital City was dissolved and the leading business figure behind the scheme declared bankrupt, amidst calls for the resignations of the leading Tory councillors who had signed-off on the deal. Meanwhile, everyone is wondering what happened to the money, and whether the loan will be repaid.

This has been the hottest political story in town for almost two years now, and it revolves around questions of proper procedure. The general complaint around the scheme has revolved around the level of scrutiny involved in loaning public money to the Digital City venture. The story has attracted regular attention in the local paper, but has in particular been kept alive by Swindon’s vibrant little blogosphere (you can track the story over two years here and here for example). And it even became a regular-ish feature in Private Eye, here and here, as a model of dodgy local government dealings.

The MP for South Swindon until 2010, Anne Snelgrove, raised the issue in Parliament shortly before the last election, when she lost her seat. She publicly acknowledged the role of local bloggers and websites in subjecting the Wi-Fi deal to scrutiny and making it into an issue (the Tories, meanwhile, complain that the deliberate ‘politicizing’ of the scheme is part of the reason it has struggled to get off the ground, or, should that be into the air?).

The latest twist in the story is the recent announcement that a new investor has been found for the scheme, although just who this is remains a big secret for now. But the Council assures everyone that the money invested in the Digital City venture will be recouped under the new agreement: “The council will also receive a share of the profits from the multinational company which is stepping in to run the new wireless internet system, although for “commercial reasons” its identity is still a secret.”

This is now dubbed Wi-Fi 2 locally. At the moment, ‘free Wi-Fi’ has still yet to be materialised in Swindon.

I like this little local story because of the neat relation it exposes between the promise of everyday hi-tech communication and the dull ‘materialities’ of lampposts (suddenly peculiarly central to political issues in the town), council procedures, and local journalism. But also because it illustrates how ‘new media’ can bring a new dimension, a certain sort of dispersed keenness of scrutiny, to very local issues – Swindon’s public realm these days includes bloggers poring over Council minutes and/or taking the mickey out of local politicians’ promises and excuses.