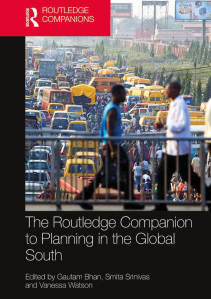 The Companion to Planning in the Global South, edited by Gautam Bhan, Smita Srinivas, and Vanessa Watson, is newly published by Routledge, and available for libraries to order (the cost is otherwise quite steep, although there is a lower cost edition for South Asia due to be published shortly). The collection is another contribution to ongoing debates about ‘southern urbanism’ and related topics, as the blurb makes clear:

“The Routledge Companion to Planning in the Global South offers an edited collection on planning in parts of the world which, more often than not, are unrecognised or unmarked in mainstream planning texts. In doing so, its intention is not to fill a ‘gap’ that leaves this ‘mainstream’ unquestioned but to re-theorise planning from a deep understanding of ‘place’ as well as a commitment to recognise the diverse modes of practice that come within it.

The chapters thus take the form not of generalised, ‘universal’ analyses and prescriptions, but instead are critical and located reflections in thinking about how to plan, act and intervene in highly complex city, regional and national contexts. Chapter authors in this Companion are not all planners, or are planners of very different kinds, and this diversity ensures a rich variety of insights, primarily based on cases, to emphasise the complexity of the world in which planning is expected to happen.”

Sue Parnell and I have a chapter in the collection, reflecting on the significance of SDG 11 (the ‘urban SDG’) and the so-called ‘new urban agenda’, extending the argument of our earlier piece on these issues. You can get the Introduction to the whole collection here.

In UniversityLand in the UK, alongside various worries about the TEF, OfS, and UKRI (try to keep up) generated by the government’s Higher Education white paper, there is also a sudden flurry of notice being taken of the Global Challenges Research Fund (GCRF). This was formally announced before Christmas in George Osborne’s Spending Review. It is now officially launched as “a new Resource funding stream” (see the RCUK’s brief  on the GCRF).  That’s how it is being presented at University level, by research and funding councils, and in cross-University partnerships. The GCRF is part of the UK science and research budget, so it belongs to the Department of Business, Innovation and Skills (BIS), according to whom “It provides an additional £1.5bn of Resource spend over the next five years to ensure that UK research takes a leading role in addressing the problems faced by developing countries. This fund will harness the expertise of the UK’s research base to pioneer new ways of tackling global challenges such as in strengthening resilience and response to crises; promoting global prosperity; and tackling extreme poverty and helping the world’s most vulnerable.” That all sounds nice, doesn’t it.

Oh, by the way, the key thing to remember is this: “GCRF is protected science spend that is also part of the Government’s pledge to allocate 0.7% of Gross National Income to Official Development Assistance (ODA).”

Maybe I’m just a cynic, but it does seem to me that there are a number of issues around the GCRF that deserve a little more honest acknowledgement before everyone (individual researchers, research teams, departments, whole Universities) rushes-off to re-brand themselves as international development specialists (I’m not one, so I’m not being defensive). The GCRF is a deeply political initiative, in the sense that it involves all sorts of pitfalls and risks and likely unintended consequences that need some thinking through by those being enrolled into the agenda of which it is a part. In fact, the GCRF is ‘political’ in at least three related senses:

It seems likely that an awful of people in British Universities are suddenly going to be learning about the SDGs, scurrying around to find people in their institution who have ever visited Mali or Cambodia, and, I suspect, engaging in more or less unreconstructed paternalistic and patronising ‘development-speak’. It’s best not to be too credulous about the public statements about tackling extreme poverty and helping the most vulnerable – if Universities are going to be drawn much more holistically into the world of international development policy, driven by nice-sounding funding streams, then they are, of course, going to be drawn into a world that is complex, and grubby, and deeply compromised (‘Aid as Imperialism’, anyone?). There is, of course, a very real politics of development assistance already, that lots of people in Universities might hopefully be about to learn a little bit more about.

Be careful what you wish for!