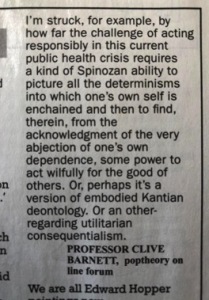 A funny thing happened to me while in lockdown…

A selection of my writing has been included in Pseuds Corner, the weekly feature in Private Eye where self-satisfied people display that special sort of confidence involved in imputing dishonourable intentions to examples of what they consider to be pomposity or pretentiousness. The offending passage of mine is from a post last month, an age ago:

“I’m struck, for example, by how far the challenge of acting responsibly in this current public health crisis requires a kind of Spinozan ability to picture all the determinisms into which one’s own self is enchained, and then to find therein, from the acknowledgement of the very abjection of one’s own dependence, some power to act wilfully for the good of others. Or, perhaps it’s a version of embodied Kantian deontology. Or an other-regarding utilitarian consequentialism.”

I’m now struck by the humourlessness that would lead one to suppose that this passage was written in a spirit of ‘seriousness’ that would allow it to be catalogued as affected. And after many years of writing lots of bad, clunky academic prose, without ever meaning to, it’s a little weird to find oneself ‘honoured’ for something written in a personal blog post. It’s almost bathetic. But I’ll be sure to watch my Ps and Qs from now on.