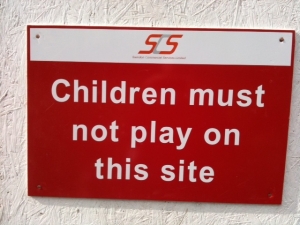 There has been plenty of news coverage recently about the progress of education reform in England, partly coinciding with teachers’ unions conferences threatening action in response to various policies introduced by Tory education secretary, Michael Gove. Not least, of course, the move to systematically transform the structure of public schooling via the Academies Act of 2010, through which schools have been bribed and/or bullied into converting to Academy status. The not-so-stealthy stealthy transformation of the governance of schooling is based on sheer theoretical and ideological prejudice, and is busily realising one of the longest standing aims of right-wing politics in UK, which is the removal of schooling from Local Authority jurisdiction.

One aspect of the reporting of this process has been the repeated line about how Gove’s project has not attracted the same sort of attention, or opposition, as changes to the NHS. There might be many reasons for this, but one aspect of it might be to do with the ways in which different public services, through the very ‘materiality’ of the services involved, constitute the subjects of public services in very different ways – a theme of the work of my OU colleagues John Clarke and Janet Newman, for example. I wonder if school education, as a public service, doesn’t constitute it’s publics in very different ways from health services?

One of the lesser reported features of the Academy-led transformation of schools is the conversion of primary schools – only 5% of primaries currently have or are seeking Academy status, but that is likely to increase. The school our eldest child goes to, since last Autumn, is one of these Academy primaries. In Swindon, as elsewhere, you apply for a place in local authority schools about 9 months before your child is due to start. So we applied back in January 2011, for a place one of three local authority run primary schools. The closest one, the preferred one, is about 500 yards outside the back gate, is a resolutely middle-class school in a middle-class area, not great Ofsted report last time round. In between applying and being informed of the successful outcome, sometime this time last year, around Easter, the school actually decided, however these things work, to apply for Academy status, in tandem with (and thereby bolstering) the Academy application of the secondary school which is in the next road over from ours, the one-time Grammar school for Swindon. We only found this out sometime in the summer, when we began to attend the induction meetings for parents of new starters. I remember being told in a conversation with one of the Governors that this application did, indeed, amount to accepting a bribe, since the offer on the table at that point from the Government was that schools which applied would get lots more money, which would not be on offer if they delayed. As of 1st August, the school has been an Academy. It’s not clear, yet, what difference this makes – it hasn’t changed its admissions policies, for example, the most obvious change that the Academy policy now allows. But it’s early days.

So, we find ourselves enrolled into a new form of public schooling, without being consulted, right in the middle of being involved in the process of, nominally at least, exercising a bit of school ‘choice’.

Meanwhile… the decision by the local council, Tory-led, to build another primary Academy not so far from where we live in the Old Town part of Swindon (the ‘old town’ bit refers to what Swindon was before the railway arrived, down the hill, in what became ‘new town), has become the focus of very intense local opposition. 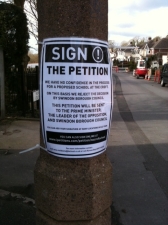 The opposition to this decision has been led by residents of the immediate area around the site of the new school – located next to a local authority sports centre, opposite our local SureStart centre, on local council land. The campaign against the school focussed on issues of procedure around planning decisions, and took a while to catch the attention of local news or politicians. But it has now become a staple item in the Adver, and the local Labour party also caught on too. Despite letters and petitions opposing the new school, it received the go ahead before Xmas, and work has started on the site.

As a news story, however, the new school continues to generate news – it’s due to open in September 2012, so is likely to remain a news item until then, at least. On March 24th, the only news item in the Adver of any significance which was not related to Swindon Town’s day-out at Wembley the next day (oops…) was about the continuing opposition to the new school by local residents. One of the leading figures in the campaign is now challenging the leader of the Tory council in the upcoming elections.

The thing is… the central issue in the debate about the school, beyond the procedural issues involved in the decision, have revolved around the concerns of residents that the new school will create traffic gridlock and reduce green space. This is, then, a very local campaign, focussed on the concerns of people living in the immediate vicinity of the new school. These are not to be dismissed lightly – what has kept the campaign has going, and made it more than a merely local story, is the fact that it is another example of a pattern of cavalier decisions by the Tory council that appear to circumvent democratic norms, such as they are at local government level. But the fact that the new school is an Academy school, and as such is part of the wider Gove-revolution, this has not been much commented upon. This isn’t the issue, in this case of local politics.

The company setting up the new school, which also runs other schools in town already, is also the same company that runs the private nursery which we send our other child to – very good, very nice people (when we only had the one child, pre-school, she went to the Council-run nursery down the hill, also very good, very nice). Our decisions about school and nursery ‘choice’ have been based primarily, I think, on issues of convenience, constrained of course by a fairly limited set of options to actually choose from – nothing unusual there (although, surprise surprise, higher income level groups benefit more from proximity effects in school choice than others).  It turns out, of course, that the sorts of information that parents are meant to use to inform their choices on such matters might well be close to ‘meaningless‘ – according to academic research at least.

The point of all this is to try to clarify something about how the constituencies of a public service like schooling are constituted. Our relationship to this issue is inevitably partial, mediated by our children; a while back, I knew very little about these things. The relationship of those opposed to the school is somewhat different, although it might overlap in some cases, but is primarily shaped by a very local ‘community of affected interest’, as they say. In neither case are the long-term, structural changes involved in transforming the governance and funding of primary schools, much less secondary schools, with all the attendant issues about inequality and social mobility, a felt concern of those people most immediately affected by these decisions to build new schools, or to convert the status of existing ones. Those changes are, literally, rather abstract, not only for those parents swept along by them like us, but also it seems for those involved in the real politics around school building in this area. In certain respects, education seems to me to constitute its public subjects very differently than do those public services associated with health care, for example – at once more partial, more selective, more inflexible, and more choosy than the subjects of health care, perhaps?