A new paper, entitled The situations of urban inquiry: thinking problematically about the city, co-written by Gary Bridge and myself, is now available in the Early View at the International Journal of Urban and Regional Research (Feel free to let me know if you would like a PDF copy of the piece, if you can’t access the Journal direct). The paper is an intervention in ongoing debates about the objects of urban theory (planetary urbanization, comparative urbanisms, southern urbanisms, all that). We argue that ‘the city’ should be approached ‘problematically’ (not the same as saying that it should be problematized), an argument we expand on by way of an engagement with Foucault’s thoughts on problematization and Dewey’s more sustained treatment of problematic situations.

“In the context of debates about the epistemological and ontological coherence of concepts of critical urban studies, we argue that urban concepts should be conceptualized problematically. We do so by aligning Michel Foucault’s genealogical work on problematization with John Dewey’s pragmatist understanding of problem formation and responsiveness. This approach brings into view the degree to which debates about urban futures are shaped by a variety of critical perspectives that extend beyond the academy and activism. We elaborate this argument through examples of global urban policy formation and practices of neighbourhood change. Approaching urban concepts problematically suggests a move away from the idea of critique as a form of scholastic correction towards an appreciation of the contested fields of practice in and through which critical understandings of urban problems emerge.”

Shameless self-promotion time again: I have a paper out in the latest issue of the online humanities journal, nonsite.org. The issue as a whole is on the theme of Situation. My paper is entitled On Problematization: Elaborations on a theme in “late Foucault”. It’s an experiment in seeing how much mileage along the path of developing useable social science concepts you can get out of a few passing remarks from a master-thinker . Here is the abstract:

“The notion of problematization has recently been identified as a key to interpreting the arc of Michel Foucault’s work. In the social sciences as well as in the humanities, problematization is often invoked to support a method of critical debunking. I argue that a more nuanced reading of elaborations of this notion by Foucault and others points to an alternative interpretation. This alternative turns on appreciating that problematizations are best thought of as creative responses to uncertain situations, an idea presented by Foucault in an account of the plural rationalities of ethical action. It is argued that to fully realize the potential of the idea of problematization, some of the founding assumptions and manoeuvres of critical social analysis need to be interrupted. The notion lends itself to an understanding of the inherent problematicity of all action, and therefore to a more modest understanding of the tasks of social inquiry.” 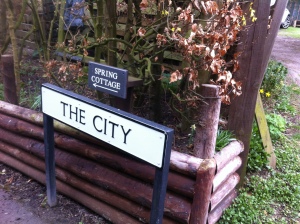 Here is the full version of a paper presented last week at the Annual Meeting of the Association of American Geographers, in Chicago, entitled ‘Problematizations: situating contemporary urban thought‘. It’s the first effort to say out loud something about different strands of work I have been doing as part of my Leverhulme-funded project on ‘the urbanization of responsibility‘. It’s very much a work in progress.

“It should be quite clear, then, that there are no criteria to be laid down in general for distinguishing the real from the not real. How this is to be done must depend on what it is with respect to which the problem arises in particular cases.”