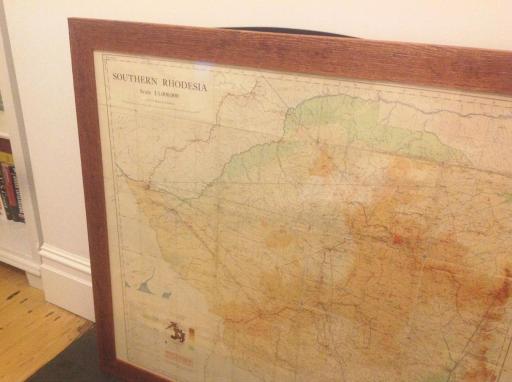 In my house, the scrap paper on which a five-year old practices writing out lists of the names of all her school friends and the toddler practices scribbling is, inevitably, a pile of discarded academic articles, drafts of OU courses, or research policy papers. Turn over a carefully coloured-in doodle of a princess, and there is a random page about the uses of ‘social science’ or an agenda of a meeting of some sort.

When I was growing up, the available scrap paper in our house was, oddly, a never-ending pile of what we refered to as ‘map paper’ – sheets of A3 paper, the blank undersides of detailed contour maps of all sorts of places, bits of the world I cannot even remember now. My father was a navigator in the RAF, and this was the paper he worked with, and then bought home for us to scribble, doodle, draw and take notes on (this might be a screen memory of some sort – the supply of map paper seems to have survived long after he actually left the RAF).

I’d like to be able to say that this inspired a life long interest in maps, and set me off on the course of becoming a geographer. I do really like maps. But I don’t remember the maps which were the underside of these piles of ‘map paper’. Other than a vague sense that they were either very green, or very beige in a sandy-desert kind of way.

If I could remember more of the Derrida that I must have read, I’m sure writing on the blank back pages of maps as a child would be indicative of some important symbolic moment in ‘becoming geograhical’.

Now, I find myself with a large map of Southern Rhodesia, a proper map, folded in an attic for about 40 years at least, now framed, not paper per se, it has a thick woven texture. It dates from the early 1960s, from a weird moment of British post-imperial reconfiguration, from the days of the short-lived, cynical experiment that was the Central African Federation, or, if you prefer, the Federation of Rhodesia and Nyasaland. There is a whole history unwrapped by this map – fantasies of air power as a vehicle of racist settler postcolonial ‘independence’; of British military connivance with this fantasy; of the last generation of ordinary white British people to have experienced the privileges of settler colonialism; and of histories prefigured – of UDI, bush wars, or, personal histories of disappointment and resentment and return.

This is a working map – the straight lines which are visible on it are plotted by my old man, tracking routes from Livingstone to Salisbury, Livingstone to Gwelo (this is a map of a disappeared nation, mostly full of lost place names). In the margins of the map, there are calculations which he has made – I don’t understand these I should say; distance, wind-speed,weight, who knows? That these routes all emanate from Livingstone dates the map, I think, or it’s use a least, to a late moment of the Federation, 1962 or 1963, to that brief period when my family were kind-of-Zambian; before I arrived.

I like this map not only because of various family associations and their post-colonial ironies and tragedies, but because these marks left by my father are indicators of the basic point, often forgotten perhaps, that maps are primarily used as devices to help people get around.

Three uses of maps, then: as devices for navigation; as repositories of fragments of memory; or, just as spare paper.

Only problem is, where to put the framed map? It’s huge. What will visitors think, on wandering into our front room and finding this bloody great map of Southern Rhodesia on the wall? Likely to give the wrong impression, I fear. It seems destined for the ‘puter room, as my daughter calls it, the one she goes into to gather scrap paper, the discarded drafts of book chapters and agenda papers. I bet she won’t be getting any of those framed in the far distant future. 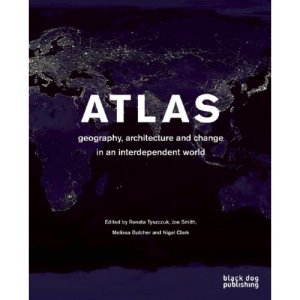 A new book, an edited collected, has just been published by Black Dog Publishing – ATLAS: Geography, Architecture and Change in an Interdependent World. It’s edited by Renata Tyszczuk at Sheffield and three of my OU colleagues, Melissa Butcher, Nigel Clark and Joe Smith. This is part of a long-standing and on-going set of collaborations between OU Geography, Architecture at Sheffield, and the New Economics Foundation, as well as others. There is an associated web-site which archives further materials from these projects, and there is a launch event in London on March 13th, New Maps for an Island Planet.

The book is, apart from anything else, very lovely to look at (I have the least visually imaginative essay, all text, no pictures). Here’s the blurb:

Atlas: Geography, Architecture and Change in an Interdependent World helps readers find their way through the practical and ethical challenges presented by globalisation and global environmental change. Atlas: Geography, Architecture and Change in an Interdependent World combines recent thinking on human geography and architecture on global environmental change issues, setting out to develop a reinterpretation of cartography and a reframing of sustainability. The aim is to find a “re-drawing of the earth” and the “making of new maps”. With a focus on the growth and remaking of cities it offers an innovative mix of essays and shorter texts, original artworks and distinctive re-mappings. The Atlas arises out of a unique collaboration between scholars and practitioners from architecture and human geography.