One of the last things I did before the start of the first lockdown was submit a paper for publication, something which now seems like a very old-fashioned thing; who knows, perhaps time will allow for that sort of thing again, one day in the future. Anyway, the paper is now published, online in advance, in the Cambridge Journal of Regions, Economy and Society: it’s titled ‘The Strange Case of Urban Theory’, and is part of a special issue soon to go live on the theme of ‘Urban and Regional Theory: Negotiating Generalisation and Particularity’. The paper is one of the outputs of the Leverhulme project on ‘the urbanization of responsibility‘ that I held, formally, from 2014-2016, but which of course still lingers in life and mind in various ways. It’s my effort to say something into the debates in and around urban studies about the geographies of theory, comparison, that sort of thing. And it was an opportunity to finally cite David Harvey’s Explanation in Geography, approvingly.

This is the abstract of the paper:

“Recent debates in urban theory have centred on the problem of whether universal concepts can have applications to particular places. These debates could benefit from more serious attention to how urban thought involves styles of analogical reasoning closer in spirit to casuistry than to explanatory theory. The difficult status of ‘the case’ in urban studies is explored through a consideration of different types of universality in this field, leading to a re-consideration of ideas of experimentalism and wicked problems. Further attention should be given to the multiple styles of reasoning through which urban knowledge is produced and circulated.”

Access to the published paper requires a subscription to the journal of course – send an email and I’ll send you a copy; or, you can access the final pre-publication version here.

One of the recurring features of academic life is the way in which particular intellectual traditions of thought are associated with particular places, as in multiple Chicago Schools, for example, but also in the way in which particular places come to stand as vectors for general theoretical claims – Paris and modernism, obviously, but more prosaically, certain places, like Baltimore or Vancouver or Columbus, Ohio, come to serve as the empirical reference points for the working through of theoretical ideas about capitalist urbanization, neoliberalism, governance and scale, and the like (this is not quite the same, but not unrelated either, to the ways in which towns and cities are presented as sites for experimentation).

When I was an undergraduate and postgraduate, the so-called ‘locality debates‘ were the focus of much of the most interesting discussion of the relations between social theory and spatiality. The very question of how to think about the relation between places, on the one hand, and knowledge of general trends, on the other, was at the centre of these debates. A whole set of issues – the relations between the abstract and the concrete, the empirical and the theoretical, the nature of case analysis, the relations between different axes of social differentiation, questions of ‘scale’ – were worked through in these debates. In the early 1990s, they ended up being supplanted by debates about ‘postmodernism’, which had all the appearance of intellectual pluralism and philosophical weight, but were often rather simplistic by comparison.

Swindon has a small part to play in this lineage of spatial theory in the social sciences. Of course, since 1988 a lot of social science has been commissioned, managed, and audited in Swindon, under the auspices of the ESRC most obviously, and more recently the AHRC and EPSRC too – including a succession of urban-oriented research programmes (Ian Gordon has analysed four decades of urban research programmes in the UK from the 1960s onwards, and it would be interesting to update this in light of more recent initiatives around Urban Transformations, Connected Communities, Urban Living Partnerships, the GCRF and the like). But as an object of urban and/or place-based social science research, Swindon also has a minor claim to significance. I mentioned in my last post Mike Savage’s account of the way in which post-1945 British social science evolved through a distinctive form of effacement of place, typified by the affluent worker studies which were not-necessarily-famously undertaken in Luton but were emphatically not studies of Luton. Swindon doesn’t merit a mention in Savage’s reconstruction of a ‘landscaped’ conception of social inquiry. But Swindon’s status as an object of social science illustrates some of the different ways in which specific places come to play a synecdochical role of one form or other in shaping images of the social. 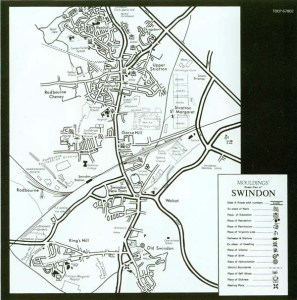 Michael Harloe’s Town in Transition, published in 1975, is the most important contribution of ‘Swindon Studies’ to urban theory more generally, I think it’s fair to say. Harloe had worked for the Borough during the town’s expansion in the late 1960s, and the book was one product of the Centre for Environmental Studies, the think tank that served an important medium for spatial thinking in the 1960s and 1970s whose alumni included Doreen Massey (somebody should really be writing a geneaology of the institutional worlds that generated spatial thought in this period). Harloe’s book is a fantastic account of the politics of post-war planning, where politics is understood as a matter of compromising, lobbying, building alliances, strategising across scales. Intellectually, the book stands at the cusp of the theoretical transformation of urban studies in the 1970s (not least through the International Journal of Urban and Regional Research, of which Harloe was a founding editor in 1977) – there is not much trace of the sorts of Marxist political economy or state theory in it, but that’s OK, it has weathered well precisely because of its resolutely organisational and strategic sense of the political.

By the 1980s, Swindon had become one of the places used to make sense of the reconfiguration of cities and regions, centres and peripheries, that was a central focus of intellectual debate in the so-called ‘spatialization’ of social science that was inaugurated by the theoretical transformations that are not yet evident in Town in Transition (it is of course slap-bang in the middle of the then much-talked about high-tech, ‘sunbelt’ ‘M4 Corridor’). Swindon was the site for one of the locality studies funded under the ESRC’s Changing Urban and Regional System initiative (which was originally conceived and proposed by Doreen Massey). In this guise, it was made into the test-case for assessing whether theories of “growth coalitions“, originally developed in the context of North American urban politics and policy, could be usefully applied in the UK (the answer was ‘sort of’, in so far as Swindon might once have had something like a stable, consensual civic coalition promoting expansion and diversification through to the 1980s, but then it didn’t). Then, in 1997, Swindon was presented as the very epitome of ‘the city for twenty-first century‘, in a book that gathers together and synthesises the findings of a succession of ESRC projects on the town and the region of which it is part (the 20ish year gap between the Harloe book and the Boddy et al book in 1997 suggests that the next book-length academic study of Swindon is due to be written just about now….). More interestingly, perhaps, Phil Pinch used Swindon as one model of ‘ordinary places‘ (the other one was Reading), places that presented challenges to the tendency of radical political theory to take rather special places as the models for general claims about political possibilities. More recently, Sophie Bowlby chose Swindon as the site for her research on the changing nature of women’s friendship networks across the lifecourse because of its typicality (she told me that when I bumped into on a train from Paddington, as you do). And in the research of Linda McDowell and her colleagues on the intersections of class, ethnicity, masculinity and labour market dynamics in the UK, Swindon again functions as an interestingly ordinary place (compared to Luton, these days), one which they use, amongst other things, to complicate narratives of politics and anti-politics.

It should also be said that all of these examples of social science research on Swindon are pursued by academics based in other places – in places like Reading, Oxford, or Bristol, University towns all of them, of different sorts. Swindon still struggles to build any significant higher education presence of its own (it’s surpassed by Luton in that respect). But perhaps this has something to do with why Swindon gets to be the place where you can learn about the value of ordinary things.

In fact, when you take the trouble to look at the social science about Swindon, you begin to see that it might have a small claim to be the exemplary ordinary place, if such a thing makes sense. But you can also see Swindon as an example of the different ways in which places are figured in social science (of the different forms of ‘geographical reasoning’ to which life-in-places is subjected) – sometimes the town is seen as representative of wider trends and patterns (in this sense, Swindon gets to be what Luton was for social science in the 1960s), even “a starkly exaggerated example” of national trends; sometimes it is framed in comparison with, or even counterpoint to other places (this is how Harloe presents the lessons of the ‘local’ and ‘national’ politics of Swindon’s growth); sometimes as the focus of forms of conjunctural analysis (as in the locality studies research). These don’t quite exhaust the ways in place and/or the local get framed in social analysis, but they do cover three important versions – if you had the time and inclination, you could even imagine writing a piece in which “Swindon Studies’ gets to enact the different conceptual operations through which geographical specificity is translated into theoretical generality. Mind you, I’m not saying ‘It all comes together in Swindon’. It doesn’t (in fact, in more ways than one, a lot of ‘it’ just passes by).