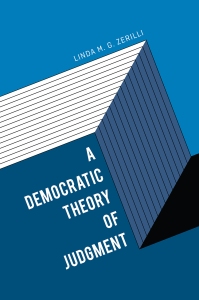 Following up on previous posts recommending the work of Linda Zerilli, I see that her new book is now out. A Democratic Theory of Judgment collects and synthesises and augments themes from her recent writings, including a sustained critical engagement in critical debates about affect in political theory (a critique that takes my own engagement with nonrepresentational ontologies seriously, in a critical way, alongside the arguments of Ruth Leys, which is flattering). But there is much more than that going on in the book it addresses what I would argue is a resolutely geographical problem of making critical judgments in new situations where inherited criteria don’t work (or, perhaps, where inherited understandings of how criteria work don’t work). My own attempt to elaborate on this problem, in my book, The Priority of Injustice, out sometime this year,  owes a very great deal to what I have learned from reading Zerilli’s work, going back to her fantastic critique of skeptical residues in feminist cultural theory.