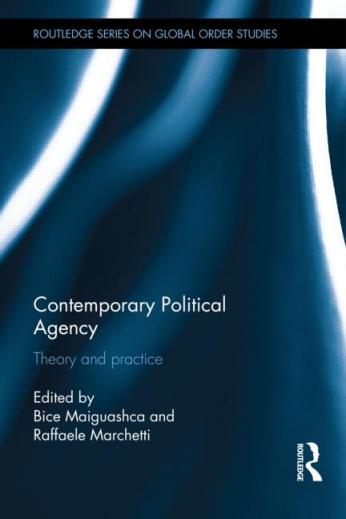 A new edited collection has just been publised, titled Contemporary Political Agency: Theory and Agency, and edited by Bice Maiguascha and Raff Marchetti. I have a chapter in it, Political agency between urban and transnational spaces, where I pretend to know about why assemblage theory and actor-network theory might be interesting, amongst other things. The book arises from a workshop held in Rome in 2009, under the auspices of the GARNET programme, an EU 6th Framework initiative, based at Exeter. In addition to all the intellectual stimulation during the workshop, the occassion was also a crash course in how to do Italian food properly, beyond pizza and pasta sauce from a jar. Here is the blurb for the collection:

This book reflects on the theory and practice of political agency in contemporary global politics. More specifically, it empirically analyses a range of different forms of political agency and explores their significance for understanding and enacting global politics. Reflecting the efforts of scholars from a variety of disciplines from political theory and Sociology to Geography and International Relations, it brings into conversation a wide spectrum of theoretical approaches including Marxism, feminism, post-structuralism and historical institutionalism. The contributors compare a range of forms of political agency; exploring their significance for the theory and practice of global politics; and reflect on the tensions and synergies generated by recent efforts to conceptualise them.

Demonstrating an innovative and interdisciplinary approach Contemporary Political Agency will be of interest to students and scholars of international relations, sociology, political economy and political theory.”