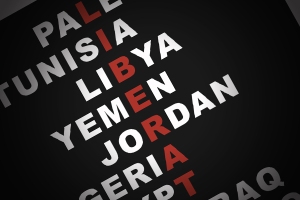 I have a short comment piece now published online in Geoforum, which discusses various different academic responses to The Arab Spring – amongst media theorists, leading lights in ‘Continental philosophy’, and anthropologists and other social scientists. It’s an attempt to raise some questions about what we have come to think Theory is, as revealed by academic public commentary on these ongoing events – contrasting a version of Theory practiced as the imposition of pre-disposed theoretical frameworks on the world, and a version in which theoretical ideas are thought of as somewhat more accountable to the contingencies of the world.

Avid readers of this blog (that’s you, Michael) might notice that this piece works over some more or less random thoughts already articulated back in February and March. Accidentally, this Geoforum piece became part of the experiment with this blogging-thing, as a way of turning a public-ish scrapbook into a slightly more honed piece of academic prose/analysis.