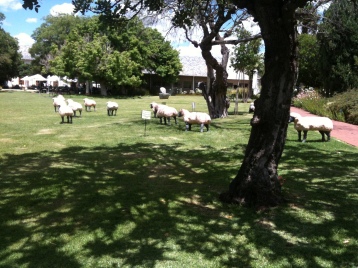 I spent a few days in Liverpool over the Christmas break, and while there I tried to take advantage of being in a Capital of Culture, as was. The main attraction was an exhibition at the Bluecoat of prints by William Kentridge, The Universal Archive. This solo exhibition provided an interesting contrast to my last proper High Culture experience, back in Oct/Nov, during my trip to Bloemfontein. Bloem’ has great art gallery, it turns out, the Oliewenhuis. They had an exhibition People, Prints and Process, of various print-based art works produced by artists associated with the Caversham Centre with which Kentridge is closely involved. This exhibition contained one or two pieces by Kentridge, but alongside the work of lots of the artists using print as their medium. The prints in the show currently in Liverpool (it’s moving on soon I think) are actually slightly out of context, in a sense – they are of course rather static, but bring to mind the more animated works by Kentridge for which they often seem to serve as templates or testing grounds, or perhaps, traces (this exhibition didn’t have any of his films on show – not necessarily a bad thing – I always find it really difficult to watch arty film in a gallery space).

It was interesting to see these two exhibitions in close succession – in the exhibition at the Oliewenhuis, Kentridge is one almost a bunch of other South African artists, and the sense of print as a distinctively African medium was to the forefront – as well as how print is a vernacular, mass medium rooted in the textures of local life, as exemplified by the widespread use of linocut techniques. Whereas in the Universal Archive exhibition, Kentridge is presented as the internationally famous artist from South Africa.

I am not making a political point (and this is not my field of expertise), just reflecting on the experience of seeing the same bits of art in two different contexts – not just two different places (sunny and warm, cold and rainy), but seeing one or two of the same pieces sitting alongside works by other artists compared to making up part of a whole collection by the same artist. The difference, in fact, between the two sites, the two fields, enhances one’s appreciation, all around.