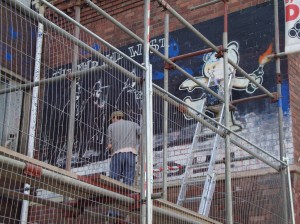 My colleague at the OU, Geoff Andrews, who knows a lot about food politics, tweets news about a Tesco opening today in Stokes Croft in Bristol. Big local news, in that part of the world. Stokes Croft is a veritable ‘zone in transition’, nestled between ‘Bohemian’ Montpelier, academic-laden Bishopston, and St Pauls, still proud to have been where the first urban riots started back in 1980. The area, quite small in fact, has been undergoing ‘regneration’ for a few years now. The proposal to open a Tesco in Stokes Croft sparked protests and heavy-handed police response last year. The opening of the store today makes me realise that there has been a rolling low-level politics of supermarkets in Bristol for a few years ago now – back in 2006, when we still lived there, a local campaign in Bishopston successfully stopped the opening of a big Sainsburys up the road from Stokes Croft – the campaign was called BOGOFS – Bishopston Opposing Glut of Supermarkets. Though successful, there are now two Sainsbury Locals in the same area – Bishopston being the hub of a whole host of alternative and/or independent retailers. There is also an ongoing struggle involving the local authority, planners, Bristol City and Sainburys over whether or not the football club can sell their ground for the development of a new supermarket and therefore afford to build a new stadium over the way – but that’s the other side of town from Stokes Croft. One of Banksy’s more famous local pieces, the Mild Mild West, is in Stokes Croft, and back in 2009 was itself ‘vandalised’ with blue paint – local convention had it that this was revenge by Bristol Rovers (blue) fans, from just up the road, for Bansky announcing he was a Bristol City (red) fan, City being from the other side of the river.
Ah, local politics and culture.
Over here in Swindon, we’re happy to have a Co-Op on every corner.